Cesspools were built on Maui prior to 1991 for individual home wastewater disposal in rural areas where there was no municipal sewer service. In its most basic and traditional form a Cesspool is a hole in the ground to receive sewage: sometimes the walls of the “hole” are lined with stone or concrete to form a pit into which sewage is discharged. Solids remain in the pit, effluent (liquid) is absorbed into soil below and at the sides of the Cesspool. Solids settle to the bottom, floating grease and scum collect at the top, and liquid seeps into the ground, most of the time through the bottom of the Cesspool. The problem with Cesspools is that the liquid seeping into the ground has the potential to contaminate the ground water & our drinking water. The Hawaii State Dept of Health has required the use of septics after 1991 to protect Maui’s ground water resources where most of our drinking water originates. A few septics were installed on Maui prior to 1990. These were mostly in Kihei and Maui Meadows. It was easier to install a shallow septic than it was to blast through rock to put in a Cesspool. Many of the early septics used an injection well for effluent disposal instead of a seepage pit. An injection well is simply a water well that has water going into it rather than being pumped out. More information on septic systems can be found by clicking on the “Septic Systems” tab to the right.The Maui County Public Works standard detail illustrated Cesspools to be six feet in 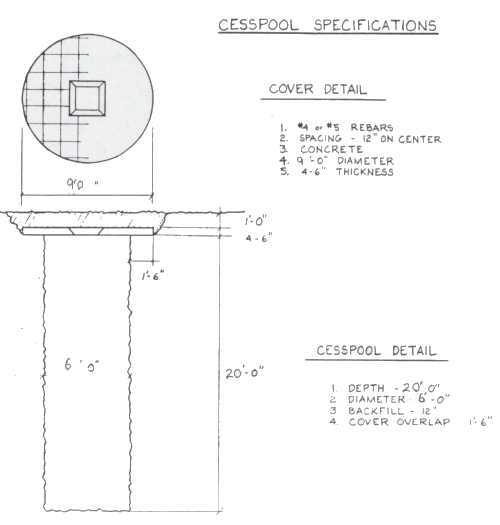 diameter and 20 feet deep (there is an illustration in the back of the Maui County Public Works publication). This was a hole in the earth with a concrete cover on it. I must interject at this point, that I have never in 30 years seen a “standard” Cesspool. They are all different shapes and sizes. Most are excavated with a backhoe whereas the Public Works Cesspool was dug with a crane and a clamshell bucket. If the sewer pipe between the house and the Cesspool is two feet deep at the cover leaving an 18’ depth, the volume will then be 3,800 gallons. Back in the 80’s everyone had a backhoe in their carport and they were all digging Cesspools. Some used precast concrete covers, others were poured in place. A typical poured cover had eucalyptus logs or railroad ties/rails laid over the excavated hole and roofing metal over that. The concrete was poured on top of that. Some, but not many, had the foresight to make a plug from which to pump. These are the Cesspools where we typically need a jackhammer to break through the concrete and then, if we are lucky, the logs have rotted and fallen into the Cesspool so we don’t have to cut them with the chain saw. Of course, by the time we break the concrete, sewage is flowing out so a saw can be a lot of “fun”. Cesspools placed in sand or loose soil usually had concrete liners or hollow tile supporting the cover. I used liners at my house and placed filter rock around the liners to insure I would never have a problem. You get what you pay for. Maui has many different soil types which determines how well a Cesspool is likely to perform. Porous rocky soil in Hana will allow water to percolate at a rate of one minute per inch where Haiku clays may require 300 minutes per inch…when it is not raining. Some locations may vary from lot to lot. Take Pukalani Terrace, for example. Some Cesspools are dug and only dirt is encountered. But, blue rock (Basalt) required many to be blasted. Sometimes cinder was found under the blue rock, in which case the water flowed out easily. Others have to rely on fractured rock to allow any seepage at all. Another place to look at Cesspools is Maui Meadows. Most Cesspools there are only 10’-12’ deep, resulting in a very small capacity. The prevailing thought must have been that beneath the blue rock that was blasted out is a cinder layer, which is capable of absorbing a lot of flow. Driving on Piilani Highway in the cut below Maui Meadows, the rock and cinder layers are evident. I hope you enjoy our frequently asked questions. Please call me at 242-5692 and ask if you don’t see your question answered. -Dom

Jump to FAQ’s About Cesspools